A young man who was filmed slipping in dramatic fashion on ice in Dublin has become an internet phenomenon, with nearly two million people viewing his heavy fall on YouTube. A number of Facebook groups have been established to try and identify the ‘Ice Fall Guy’, with numerous members of the social networking site claiming to be the Internet star. This is his story. Brilliant ;-) 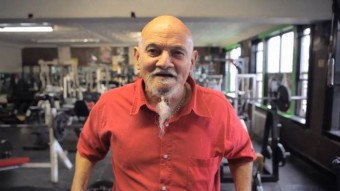 FRENCHIE’S – A Gym in Brooklyn

The Art of Logo Design