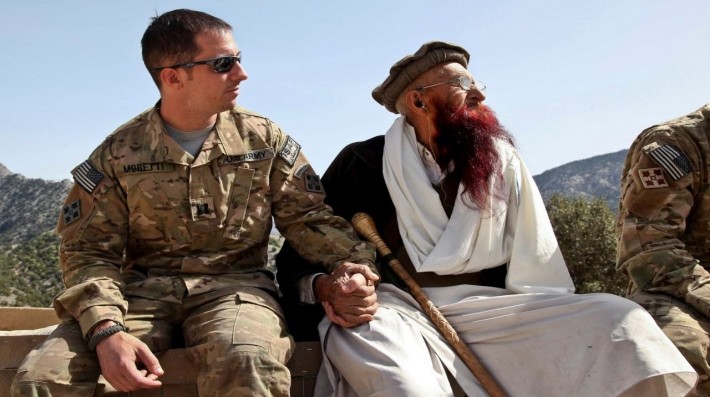 Summary:
The first images shows a group of young men in a train. It’s one week before deployment, an insert informs us, and the are either joking or sleeping. Then, in [...]

The first images shows a group of young men in a train. It’s one week before deployment, an insert informs us, and the are either joking or sleeping. Then, in May 2007, they begin their 15 month deployment in the Korengal Valley of Eastern Afghanistan, one of the most dangerous postings in the U.S. military. For the rest of the film, the men’s mood will never be as carefree as in the beginning. This is war and the enemy is ubiquitous. Filmmakers Sebastian Junger and Tim Hetherington stay close to the soldiers – and witness battles as well as the growing depression among the troop.

Just two minutes into the film, the viewer witnesses a Taliban attack on a U.S. tank – the camera never pans away, not even when the tank (still under siege) has to be left behind. The microphone seems to be damaged, giving the images a feel of silent shock. Throughout the film, interviews show the surviving soldiers looking back and how their ideas of a short, clean war were disillusioned.

Captain Dan Kearney for example was optimistic at the beginning: „They colonel initally told me: „They take fire every day.“. And I said: „How do you take fire every single day from somebody? You gotta go out there and kill the damn enemy. You are scared. We thought that after two months of being there we would fix it and we wouldn’t get shot anymore.“ This tells a lot about the ignorance and the lack of knowledge about Afghanistan among the US troops. Soon the men don’t know why they are there anymore: „What are we doing?“, one of the men asks. The film also shows the strategical plans the army officers had – and how none of them works in a country with a hostile, rocky landscape like Afghanistan. „I saw a lot of professional tough guys on their knees“, a soldier recollects.

Some men also talk about their motivations for going to the army: „My mum was a fucking hippie. I had a nice childhood, but I wasn’t allowed to have toy guns or watch violent movies. If they had allowed me that, I wouldn’t have gone there.“

The footage is impressive and one can only admire the filmmakers’ bravery: it is raw, direct and makes the viewer feel the constant threat from the Taliban. Sometimes the soldiers try to joke away the danger, but those moments are brief. Every second an ambush can be expected. The footage makes clear that this is no childs game: when the soldiers are under fire you can see tears in their eyes.

In the scenes where the returned soldiers talk about the men that were killed, the film is also heartbreaking. Though the film doesn’t really comment on the political aspects of the war, the footage and the interviews are a strong statement about the absurdity of war. The film’s title comes from an outpost that was named after one of the first victims, Juan Restrepo.

An important film about a war that goes on to this day.

The next big thing from Apple