Dick is right. “Every American should see this.” It is real and it is striking. In some places it stands 18 feet tall and looks like the gates of Mordor. In other places, it is barely 10 feet tall and looks like it was put together with a stapler. It runs from the Colorado River directly into the Pacific. It is big, intense and intimidating. And it is unfinished. Gaping holes are everywhere.

Physically it’s confusing. Politically it’s puzzling. Ideologically it’s complicated. But for Dick and Ron, who both live within a few miles of the border, defending it is simply a matter of protecting themselves and preserving their own beliefs. Drug smugglers don’t come to the United States to make an honest living. As the recent killing of Border Patrol Agent Robert Rosas shows, the border is more than a moral line in the sand. The fence is real. We recommend a visit. 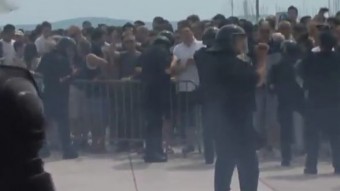