Ben Linden was surfing the waves only 100 metres from shore in July when a shark attacked and killed him. It was the fifth known fatal shark attack in Western Australia on surfers and beach-goers in the past year.

Surf skier Martin Kane was attacked by a four-metre-long Great White Shark just 150 metres off Perth’s metropolitan coast. He survived after a friend came to his rescue.

The state government has responded to fears that the beaches are no longer safe by issuing kill orders on sharks that pose “imminent threats” on beach-goers.

Western Australia premier Colin Barnett announced a $7.12m package to fund the killing, tagging and research into shark movements. The money will be used to fund aerial patrols, tag sharks to monitor movements and reduce the risk of attacks along the coastline.

But conservationists are angry at the “knee-jerk reaction”. Tim Nicol of the Conservation Council of Western Australia also calls it a “guilty until proven innocent approach to sharks”. They argue that climate change has pushed sharks inland and that the territorial animals are just responding to their natural instinct.

Many shark species are already threatened with extinction. It is estimated that humans kill about 70 million sharks each year.

But Australians like Keith Halnan welcome the kill order. The veteran surfer says more needs to be done to protect surfers who venture further out to catch a wave.

Others in Western Australia want shark nets erected around cordoned swimming areas like in South Australia, but the government says it is not feasible due to the layout of the natural coastline and that the nets will harm other marine animals.

Western Australia is known as the world’s deadliest place for shark attacks but its beaches attract tens of thousands of tourists every year. Tour operators fear the attacks will hurt their business.

The film tackles the growing debate in Australia over how much of this fear of sharks is hyped up and asks if killing sharks is the solution. 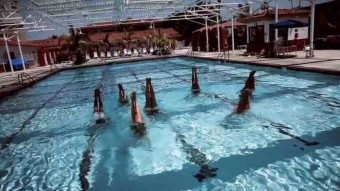