Earth. November 14, 1969. Three astronauts, with spacesuits, food, water, and a battery of scientific and communications equipment, prepared to fly to the moon. Thousands gathered at the Kennedy Space Center in Florida, including President and Mrs. Richard Nixon, to witness the historic launch. It was raining that day, but that was no cause for delay. The ship that would carry them into space was designed to launch in any weather.

But how would it respond to a powerful electrical storm now gathering above the launch pad? That was just the beginning of the incredible journey of Apollo 12.

With three astronauts fastened into their seats, the countdown proceeded. Astronaut and Mission Commander Pete Conrad would say later: “The flight was extremely normal, for the first 36 seconds.” The five engines of the Saturn 5’s huge first stage were designed to burn through 5 million pounds of liquid oxygen in just two and a half minutes, and to send the spacecraft up 67 kilometers above the Atlantic Ocean.

When it reached an altitude of 2000 meters, something unexpected happened. Racing through the stormy environment, the rocket generated a lightning bolt that traveled down its highly conductive exhaust trail.

Another bolt hit 16 seconds later. All of the spacecraft’s circuit breakers shut off. The tracking system was lost. A young flight controller in Houston, Texas instructed astronaut Alan Bean on how to turn on an auxiliary power system. The mission was back on track. Once in Earth orbit, all systems appeared to check out, and flight control officials gave the crew the green light to leave Earth.

The astronauts were not told of concern that the lighting strikes had damaged the pyrotechnic system used to deploy the parachutes that would ease them back through the Earth’s atmosphere. If that system failed, the astronauts would not return alive.

This mission would have its share of perils, not unlike those faced by a long line of past explorers, whose courage and restless spirit propelled them into the unknown. This one, however, was backed by years of technology development, test flights, astronaut training, and the largest support team back home that any mission ever had.

But hundreds of thousands of kilometers out in space the three astronauts were pretty much on their own. What made Apollo 12 unique was the friendship and chemistry of its crew. Conrad, Bean, and Richard Gordon were all Navy men. Working and training together on the Gemini program, they had gained each other’s respect and trust.

Now, hurtling across more than 400,000 kilometers to the moon, they prepared to fullfill the mission’s goals. One was to set up a scientific station designed to record seismic, atmospheric, and solar data. Another was to visit an unmanned lunar probe called Surveyor III that had landed there two and a half years before. The idea was to bring back a part to study the effect of the lunar environment.

A third goal was to improve on the landing of Apollo 11 just 5 months before. Dropping down over a region called the Sea of Tranquility, pilot Neil Armstrong found himself heading straight for a crater full of boulders. He had to fly over the planned landing site and find a new one. Now kilometers beyond the target, the lander, called Eagle, was literally running out of gas.

With less than 30 seconds of fuel left, Neil Armstrong and Buzz Aldrin finally touched down on a landscape obscured by dust stirred up by the vehicle’s thrusters. Future astronauts would have to be able to make precision landings at locations dictated by science. That meant they would have to touch down on landscapes filled with all kinds of rocks and craters.

For Apollo 12, the science pointed to a region known as the Ocean of Storms, some 2000 kilometers from where the Eagle had landed. Here, the landscape is dark from lava that cooled to form its flat expanse billions of years ago. 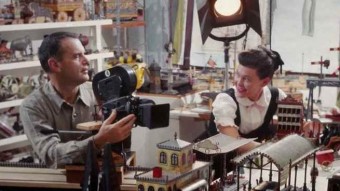 EAMES: The Architect and The Painter – [Trailer]